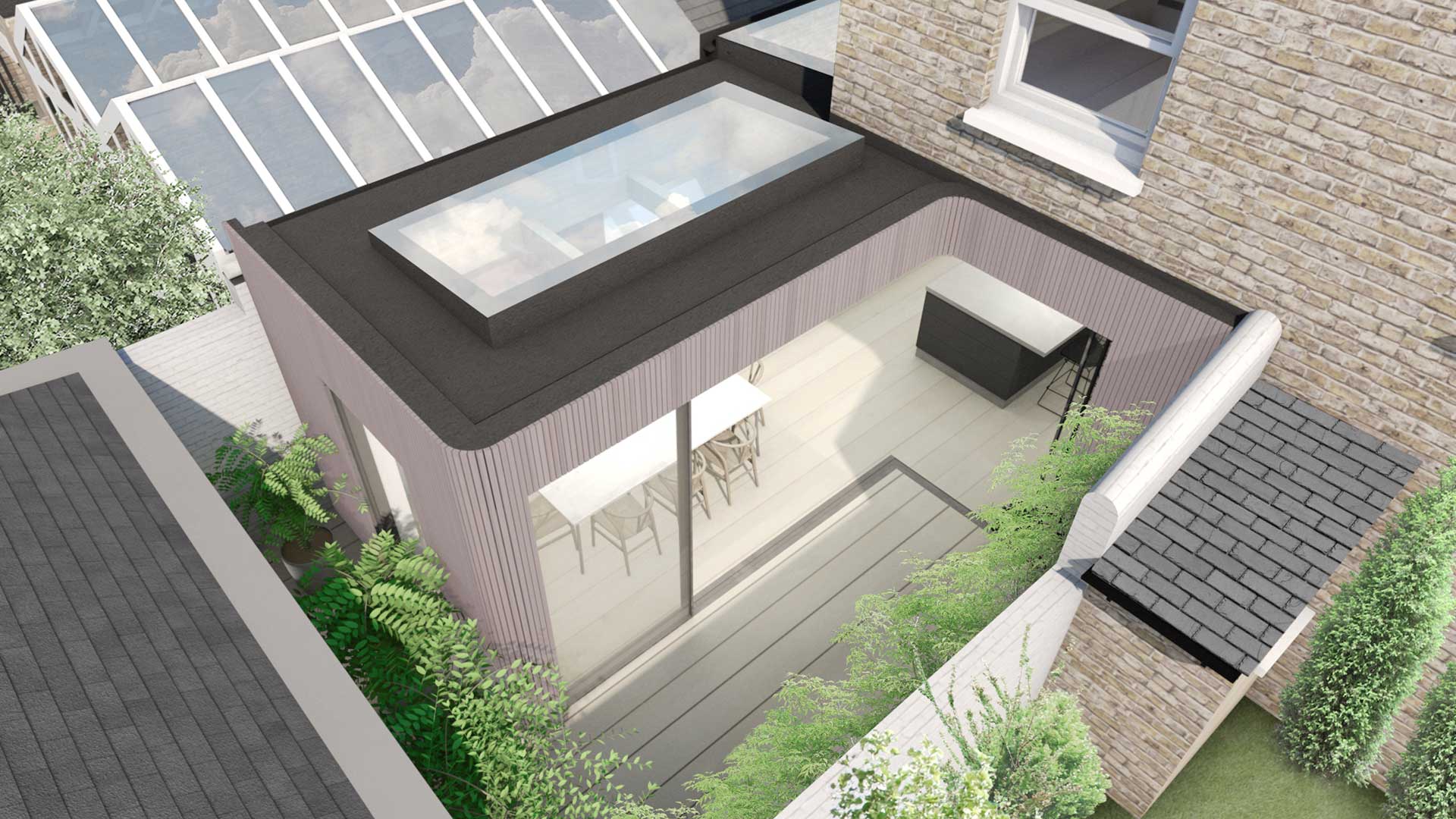 We have designed schemes for this project which involves the opening up and enlarging of the ground floor - in order to create a large, open-plan living area, reconfiguration of the first floor and a loft extension.

The clients came to us with the brief of creating a contemporary, open-plan ground floor, which maximised usable space in a 5 metre-wide Victorian terraced house. They wanted a larger kitchen and dining area and a living/seating area that was better connected to the kitchen for their growing family.  The priority was also to get more light into the space.

Our scheme completely opens up the ground floor, by removing all internal walls, however, a small entrance hall has been retained in order to create a lobby between the living space and the front door.  This also separates the stairs and landings throughout the house from the kitchen area - maintaining the protected stairwell for fire regulations.  All other walls were removed and the secondary entrance from the hallway into the kitchen (which was also accessed by the living room) was omitted and instead that space became part of the open-plan area.

The existing living area is to remain at the front of the house and the original features; fireplace, cornice, ceiling rose and skirting, are to be retained here in order to define this room as the formal, more traditional living room.  This is separated from the informal TV/sitting area by a change in level and two steps, which existed but which we have moved forward to this point, in order to define different spaces within an open area.  This visually and spatially connects this sitting area to the kitchen/dining area as they now are on the same level - whereas previously only the kitchen was set at the lower level to the rest of the house.  In this large space to the back of the house, the design is contemporary - with recessed skirting, no cornice and flat panel doors.

A bar area at the end of the kitchen and the start of the sitting area connects both spaces functionally, which the clients wanted to be able to entertain in.

Access down into the existing cellar remains under the stairs in the living area, however, we have enlarged the landing at the top of the cellar stairs here, in order to create a storage area/cupboard and space for buggies and coats etc.

To the rear we have extended into the garden, retaining 50% of garden to comply with Wandsworth’s planning requirements.  We have designed the extension so that it protrudes lengthways into the garden, instead of across the back of the house.  This sits alongside the neighbouring extension and extends almost to the rear garden wall.  This responds to the orientation of the site and creates a decked garden that faces South.  This section of garden is also the area that is not bordered by tall neighbouring extensions on the boundary lines and therefore will enjoy more open views through the surrounding buildings.

The client wanted to maintain a small section of garden only, for sitting.  Because of the size of the garden, we designed the extension to be glazed, with an open corner, to allow the dining area to be fully opened up to the garden and very much become an extension of the external space in the summer.  The clients could easily move their dining table onto the deck for external dining.  A pivot door at the end of the extension allows for easy access to the garden and also provides a view of a living wall/planted wall to the rear from the front of the house.

Timber cladding and curved edges to the extension creates an interesting form and softens the building when viewed from the small garden. 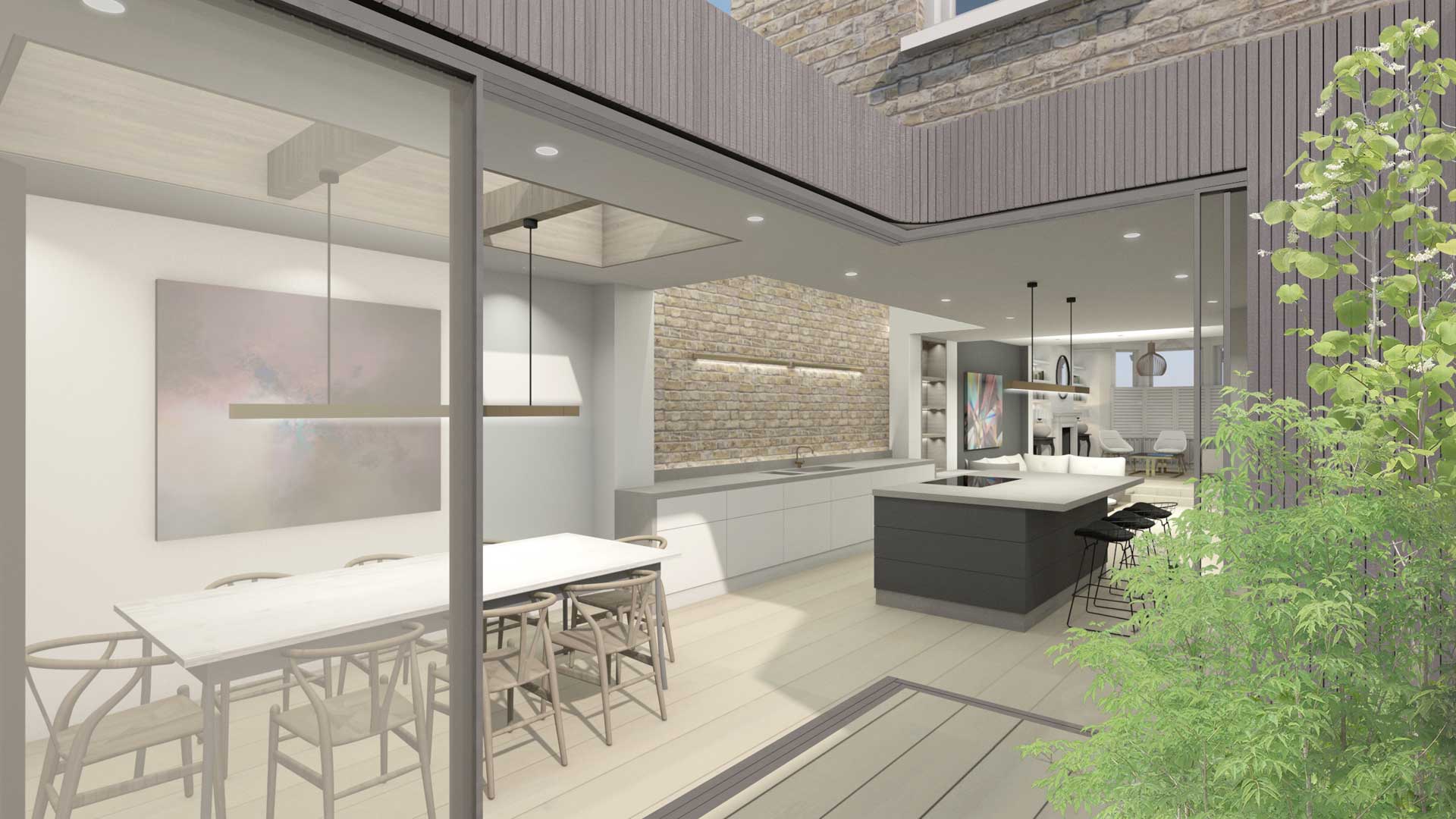 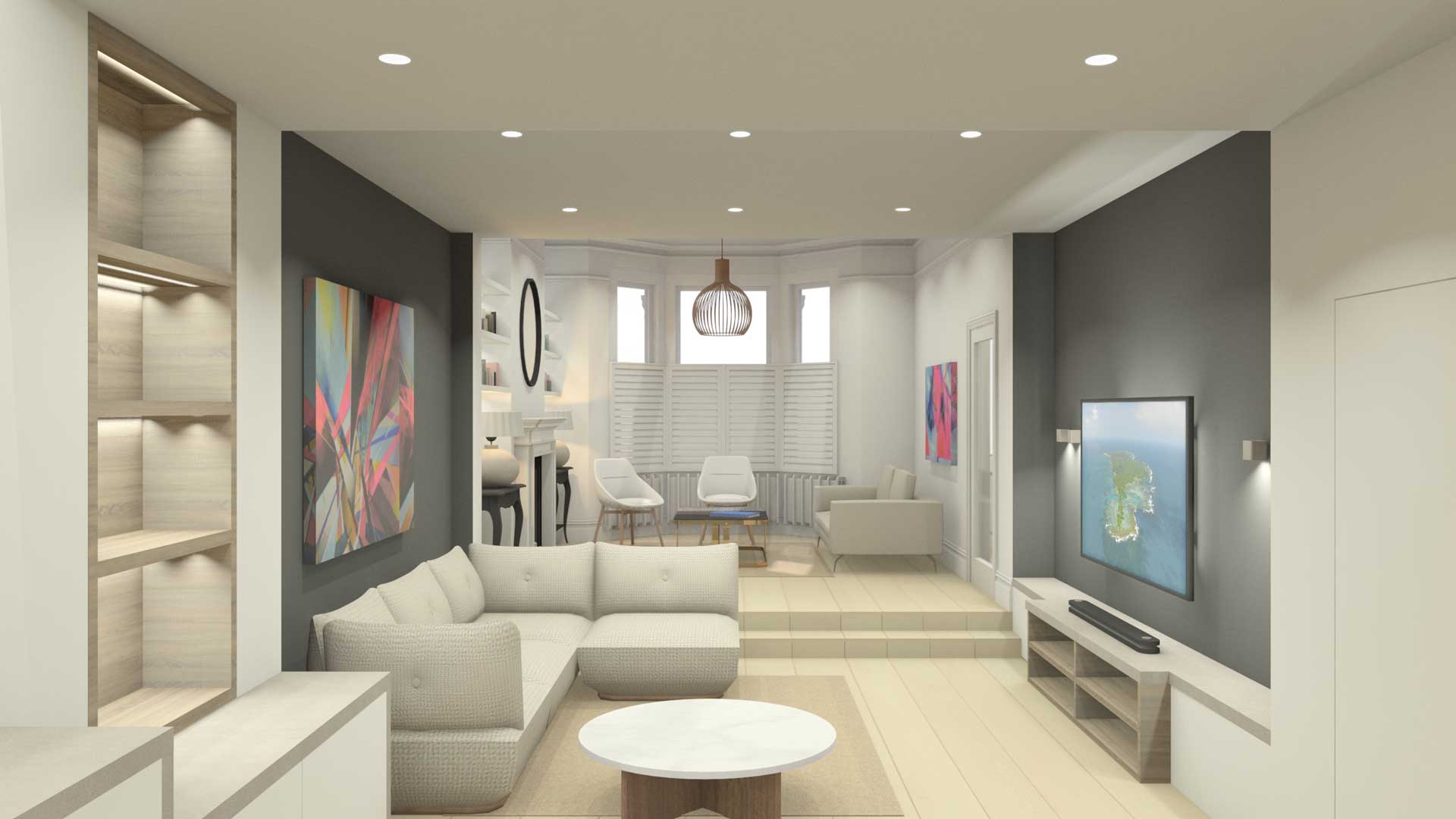 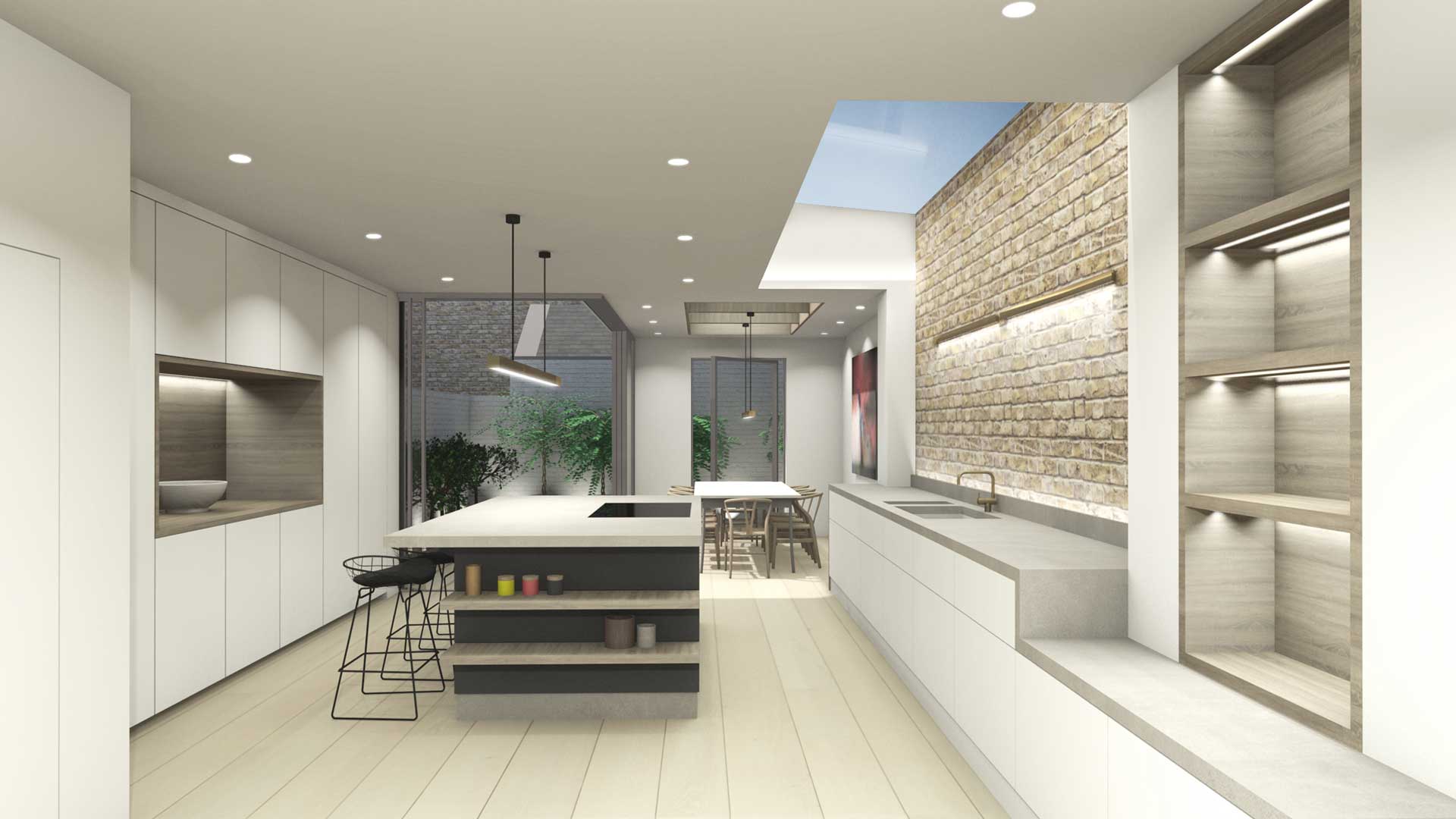 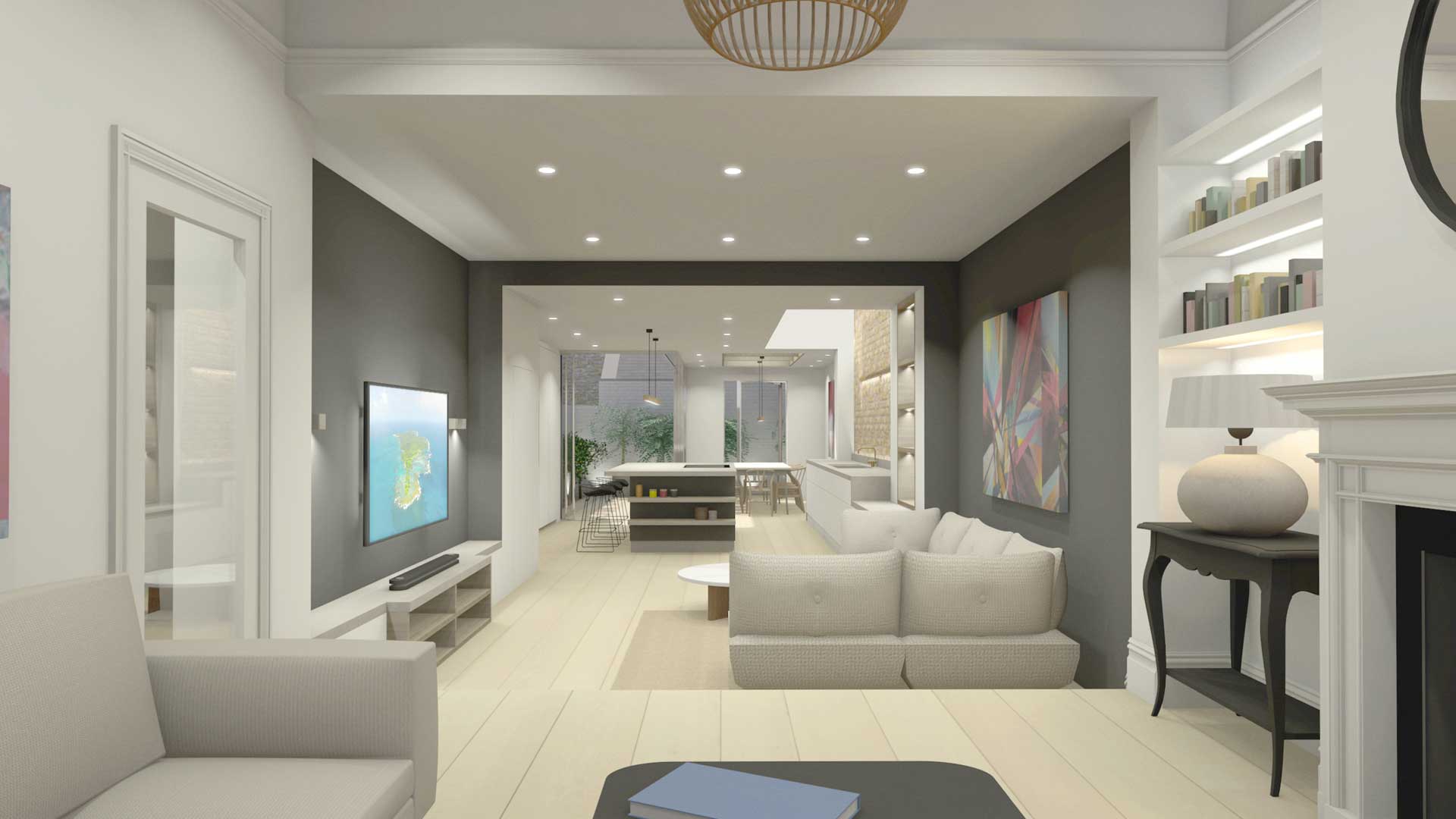 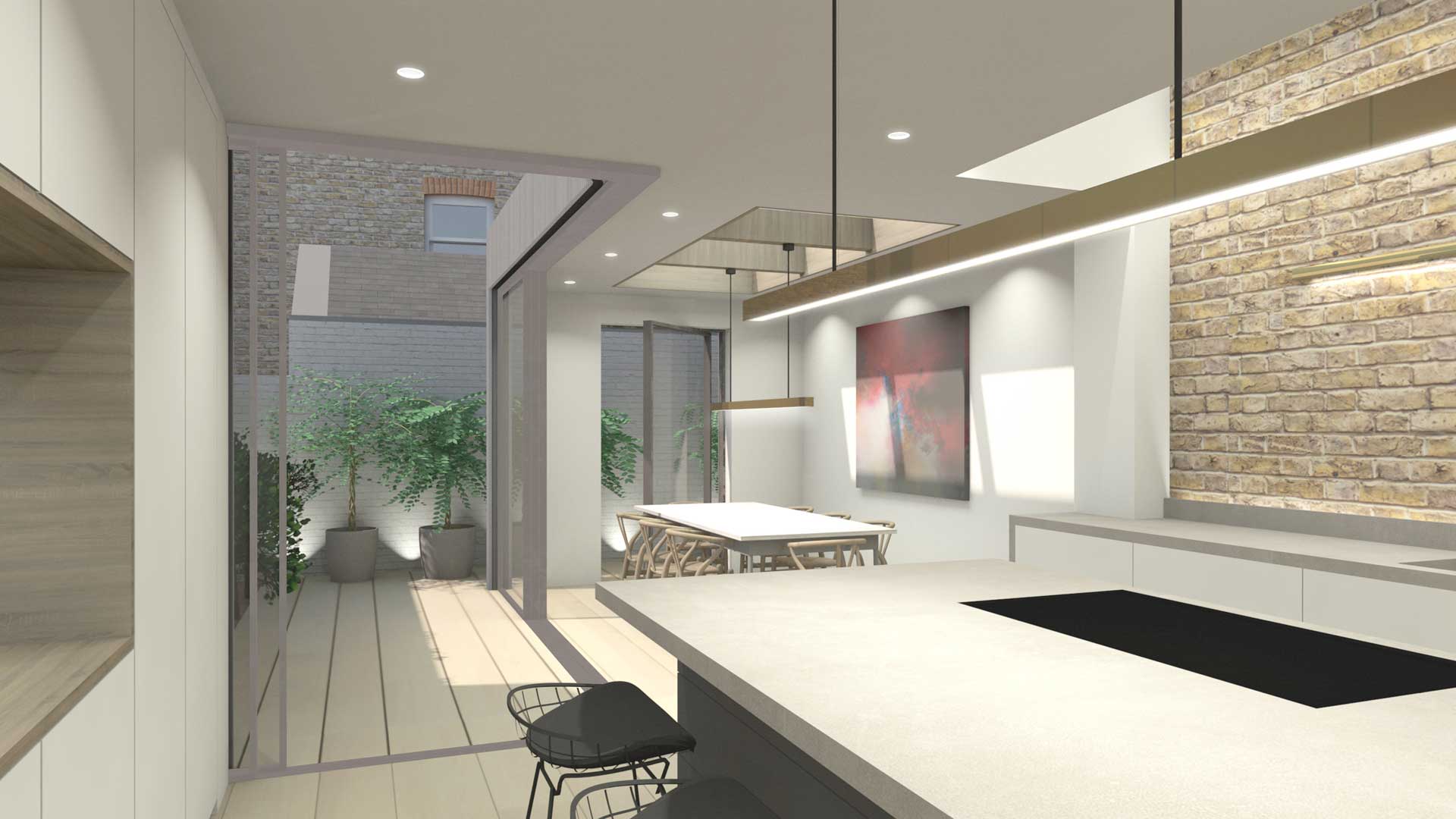