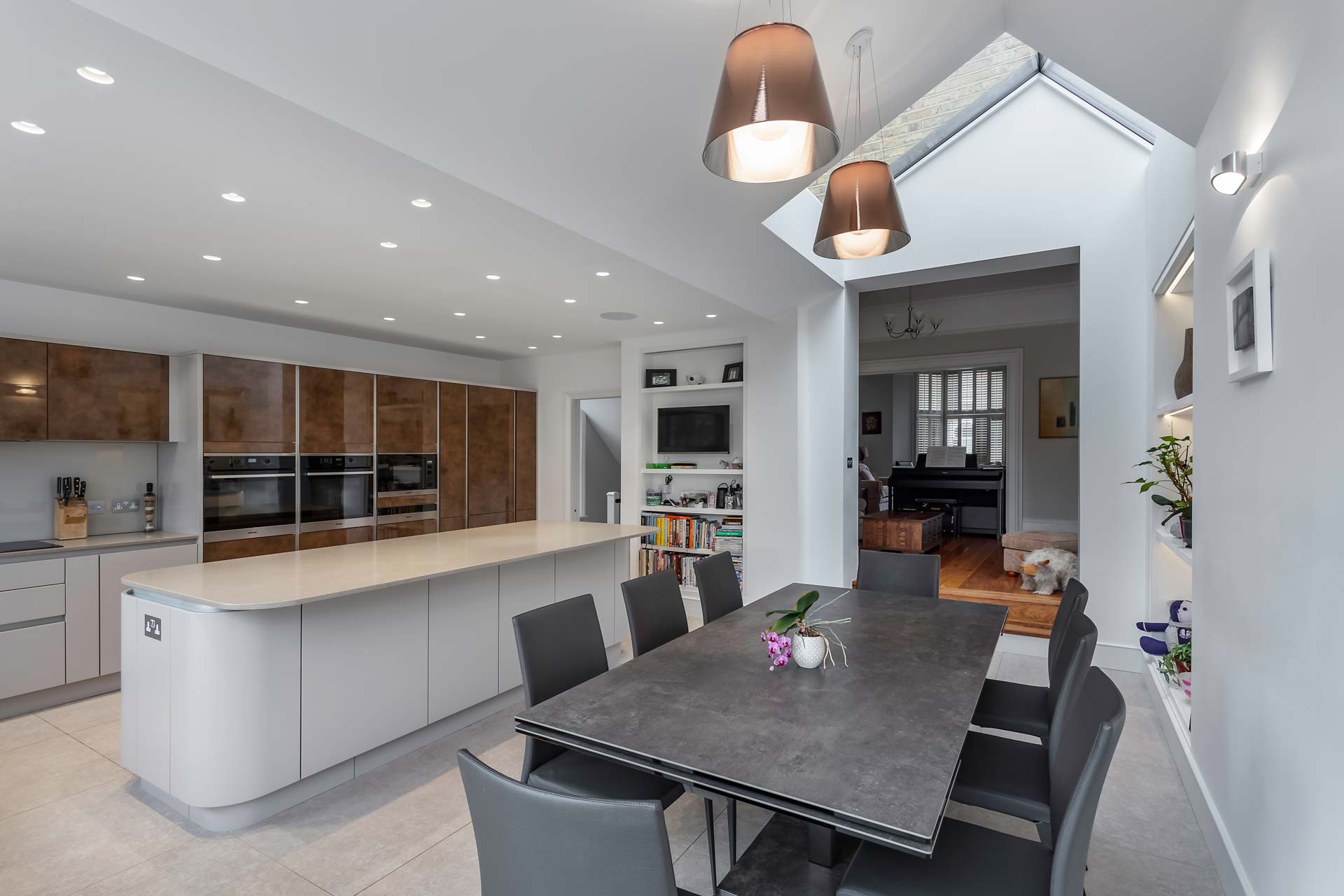 We have just completed this project located in the Wandsworth Common Conservation area known as the 'Toast Rack', which is the name given to a tight grid of late Victorian red-brick semi-detached houses. As well as the basement extension, the ground floor and kitchen area became the most important aspect of the project and we designed the kitchen using modular units. We offer this design route alongside the bespoke kitchen designs we do.

Our response to the brief

Because of the scale of the original garden the client was very keen to not extend further into it or beyond the original conservatory but the aim was to increase the light and feeling of the space within the kitchen. We did this by raising the roof over the proposed dining area and removing the large down stand in the kitchen ceiling to bring as much height as possible into the space.

The kitchen brief was to make a flexible space that would not feel too cramped and closed in and so we introduced small curves to soften the impact of the large island in the space and the island was kept free of any appliances.

Light was brought into the kitchen with tall sliding doors from Maxlight, which had a fixed glazing panel above. A large fixed rooflight was positioned to break-up and define the original house from the new extension.

For the new kitchen design we used the modular kitchen units from Mereway Kitchens, which were fitted by the main contractor on site.

We worked closely with our client on the design of the kitchen and used 3D modelling and 2D drawings for the layout of the kitchen. This, as on every project we undertake, ensures the layout/scale where as expected and the client was aware from the outset how the kitchen would look and feel in the end. Colours and the setting out were changed over several 3D layouts until the final layout was confirmed.

The materials and colours for the kitchen were picked to keep the room feeling light and to draw the eye to the rear garden. The colour of the tall kitchen units on one side of the kitchen was chosen to bring one strong element of colour into the room, which was then picked up with the accessories used throughout.

Working on multiple levels of the house at one time and coordinating items in a limited space is always a challenge but we work very closely with the contractors on site and work with them to finalise a timeline for the project interior design items. This helps to focus all the decisions that need to be finalised with the client throughout the contract period and ensures everything is completed with more than adequate time for us to work with the client to finalise details and allow them time to choose finishes etc.

The kitchen space now feels light and spacious and the connection to the garden is strengthened by the level threshold, with similar colours used on the decking and the internal tiled floor to create a seamless flow.